Mo Abudu’s ‘Fifty’ Looks, Sounds, and Feels Feminist, But How Feminist is it?

Prolific writer, playwright, and director, Biyi Bandele, in addition to his award-winning novels and plays, directed a handful of Nigerian films. The three films he directed before his passing earlier this year are inarguably some of Nollywood's most impressive films to date. His first film, an adaptation of Chimamanda Ngozi Adichie’s critically acclaimed 2006 novel, Half Of A Yellow Sun, told the story of Olanna and Odenigbo’s love story amidst the Biafran war in the mid-sixties.

His second film, Fifty, an EbonyLife production that chronicled the lives of four friends on the brink of or in their 50s. His third and most recent film Elesin Oba; The King’s Horseman, was a riveting tale of a King’s chief horseman who must sacrifice his life to serve his dead king in the afterlife. His other projects include television series such as MTV’s Shuga Naija; and Netflix and EbonyLife’s recent hit limited series Blood Sisters.

His frequent collaboration with EbonyLife tags him as one of the directors championing Mo Abudu’s ever-zealous drive to push women-centred films to the limelight. From her pioneering daytime talk show Moments With Mo, and other leading shows such as Moments Z, Desperate Housewives Africa, and Fattening Room, Mo Abudu’s commitment to putting women’s stories at the forefront is nothing but commendable.

Many of her films produced and distributed through her production company, EbonyLife Films, such as The Wedding Party, Oloture, and Elesin Oba have become critically acclaimed and record-breaking in the Nigerian film industry. At the same time, several of her other films have also been on the flip side of the industry’s defining moments, such as her recent film, Chief Daddy 2, which was termed an “unfocused mess” by Decider.

That being said, there is but one of her films that sits comfortably neutral in the spectrum of defiantly brilliant and a colossal shitshow. 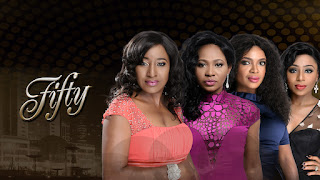 Fifty, a 2015 drama film executively produced by Abudu and directed by Bandele, is a tale of four friends on the cusp of the fifth decade of their lives. The four women, Tola (Dakore Egbuson-Akande), Elizabeth (Ireti Doyle), Maria (Omoni Oboli), and Kate (Nse Ikpe Etim), navigate love, lust, betrayal, marriage, and friendship through the 100 minutes of the film.

Through the plethora of reviews and criticism of the film, many were either all for the film being an evolutionary piece of Nigerian cinema or blatant about the film lacking any story structure. A neutrality that invites a question as to whether the film was seen as ‘evolutionary’ because of its glossy approach to filmmaking and a caricature of a feminist film and ‘bad’ because it didn't feed into society's monotonous idea of women.

“Wait, but Fifty is most definitely a feminist film,” you may tell yourself. “Its key cast and crew were women, heck the entire story is about women!” you add, trying to convince yourself. On paper, Fifty does present itself as the perfect feminist film fuelled by female power. An all-star lead crew with Abudu accompanies the star-studded all-female lead cast as executive producer; award-winning screenwriter Kemi Adesoye and playwright Bola Agbaje as writers; and award-winning producer Tope Oshin as producer.

Determining whether it can truly be termed a feminist film despite its female-led and centred team might be difficult as there are many aspects to what defines a feminist film. 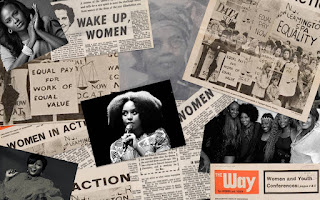 The theory, which is highly influenced by second-wave feminism - one focused on critiquing the patriarchal, or male-dominated, institutions and cultural practices throughout society - draws on critiques of ideologies, semiotics, and psychoanalysis.

Accordion to the works of feminist film critic and journalist Molly Haskell and Marjorie Rosen; Ideologies centre on a direct relation between film and society, whereas Semiotics and Psychoanalysis look into the role of cinematic techniques in the representation of sexual differences and structures of desire and subjectivity.

Without dissecting Abudu’s Fifty to reveal if it does, in fact, draws on the tenets of feminist film theory, it would be interesting to see if the film would pass other basic feminist film tests.

The Bechdel test, the most basic and popular of them all, was developed in the mid-1980s by Alison Bechdel in a comic strip, Dykes to Watch Out For. The test evaluates if at least two female characters talk to each other about something besides a man. By this test alone, Fifty fails, as this first woman-to-woman conversation, which is between Maria (Omoni Oboli) and Chi Chi (Lala Akindoju), is centred around Maria’s (Omoni Oboli) lover, Kunle (Wale Ojo). 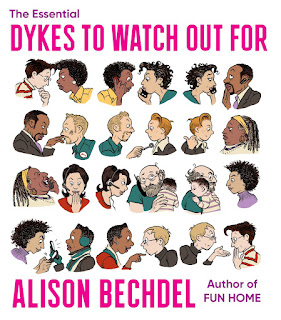 The Mako Mori test was devised in 2014 as a deliberate replacement or addition to the Bechdel test. It evaluates if a film or television show has at least one female character and that this character has an independent plot arc and that the character or her arc does not simply exist to support a male character's plot arc;

In employing the Mako Mori test; Fifty fails...technically. Because while the film passes the first criteria of having at least one female character, seeing as the lead characters are four females, it technically doesn't pass the remaining checkmarks. Since the lead characters’ arcs don’t exist to support a male character’s plot arc, they all revolve around issues with the men in their lives.

Rather appalling to discover Fifty fails the two basic tests, but that doesn't mean the entire film is a sham. It just means it doesn't subscribe to western feminist ideologies. The term ‘feminism’ as we know it is not limited to the West, but they predominantly stir the discourse around it. It’s important to note that feminism isn't one size fits all and that in Africa, feminism takes a slightly different shape.

African feminism, like western feminism, challenges patriarchy, but it also resists oppression based on ethnicity, class, tradition, globalisation and other specifics to Africa.

Fifty in its own right is a Liberal African Feminist film as it uses its female characters to stir discussions about gender roles, gender gaps in the economy, and sexual rights. The film, regardless of the Bechdel and Mako Mori test, speaks to the realities of African women. Though the film was complicit in reinforcing already present female stereotypes such as powerful women being emotionless, rich women being divas, and pregnant women being overemotional and unable to make rational choices; it does a good job in also presenting counter-narratives. 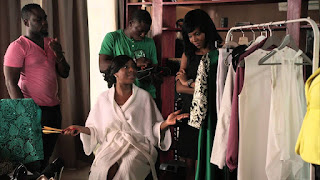 Through Elizabeth (Ireti Doyle), the film shows women that they too can have agency over their sexuality and sexual lives. And through Tola (Dakore Egbuson), it shows that women can stand up to their abusers despite how many years have passed.

Fifty is a unique film that possesses the duality of performative feminism and actual feminism within it.

As the idea of feminism settles among Africans and stops tasting like a sour patch, it's possible many can be more welcoming of films that actually make an effort to dismantle oppressive social norms, rather than present themselves as performing to do so.