How Government Policies have contributed to Low Female Participation in Sports

On December 5 1921, less than a year later, the football association ruled that women could no longer play on professional grounds, effectively issuing a ban on women’s football on the grounds that “the game of football is quite unsuitable for females and ought not to be encouraged.”

The ban lasted 50 years, irreparably damaging the traction of the sport. Nevertheless, women footballers did not cease to exist, and unofficial matches continued to be played. However, the ban relegated most of them to play at the amateur level as the professional ban lasted until 1971, and they could not earn a living from the sport like their male counterparts.

In 2008, the FA issued an apology for its treatment of women footballers during that period; too little too late. Over 100 years later, female football has not recovered. No women’s club game has succeeded in beating the attendance record of that December 1920 game.

Gender inequality in sports is evident in participation, opportunity and pay disparities. Policies like the FA’s 1921 ban are malicious and misogynistic, and even though we may not see that kind of overt sexism today, it still exists.

A 2022 study by Springer looked into the relationship between government politics and sports governance as well as its spillover effects.  The study looked into European countries like France, Denmark and Germany, where national and state governments closely relate with sport governing bodies. The study asked one question; How are state parliaments and their government's composition in terms of gender and political party associated with board gender diversity in sports governing bodies?

Existing research has shown that leaders in sport governing bodies worldwide are still predominantly men. The IOC set itself the goal in 2017 to gender diversify its governance structures until 2020. Between 2016 and 2018, the share of women on the IOC board of directors increased from 19 to 29 per cent, which is still far below the target of a percentage of women between 40 and 60 per cent representing a gender-balanced board.

Several of England’s football teams have cut injury and sick pay for women players, providing them fewer benefits than male footballers. In addition, the Japan Sumo Association does not allow female wrestlers to compete professionally, and female athletes are routinely underpaid and lack support and promotion from their governments like their male counterparts.

The gender pay gap in American sports is aptly illustrated in the table below. 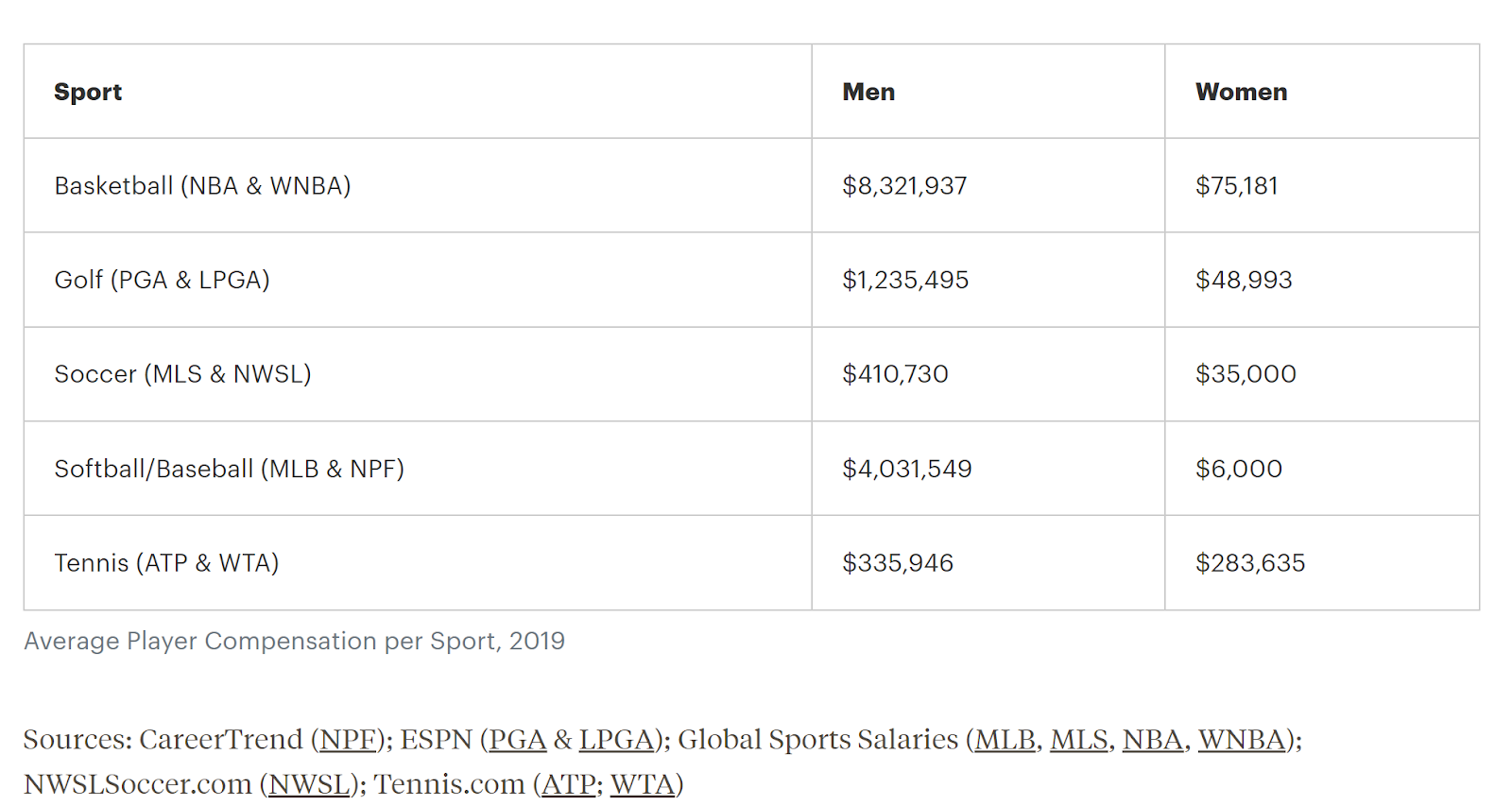 In Nigeria, oppressive government policies are rife, government support and intervention are sparse or inadequate in many aspects of society, and sport is not exempt. The uphill battle women in sports fight worldwide is coupled with the Nigerian environment causing male and female athletes to struggle for support, especially female athletes.

Document Women spoke to Aderonke Adesola on Twitter as Olorisports, an indigenous sports presenter based in Ibadan, Oyo state, on her views on the support or lack thereof of the government and policies towards women in sports.

“First and foremost, government policies are usually based on political purpose, which is not too beneficial for all and creates an atmosphere biased towards gender in sports. They fail to make policies that go down well with women, yet, they develop male sports because they believe it will attract more sponsorship," she said. "As a result, government initiatives always favour male athletes over female athletes. They conduct it like a business, but women are winning the trophies and still aren’t getting structural support.”

When asked if government support has dwindled or increased over time, Ms Adesola says;

“If someone that loves sports is not in the position of power, I don’t think Nigeria sports can attain greater heights. It’s getting worse actually because athletes have to help themselves to a certain extent before the government can intervene, which is not supposed to be. Once you’re capable, you should be adopted by the government to be the best version of yourself.”

Ms Adesola suggests that a complete overhaul is needed for women’s sports to progress as it should in Nigeria.

"Sports should be seen and treated as a business and a way to boost the nation’s economy, which can serve as a huge source of income for other developed countries," She said.

In May, the United States Soccer Federation and players representing the men and women national teams finally agreed to implement equal pay, paving the way as the first football body to pay equally.

In conclusion, sticking to the “adopt an athlete initiative” will go a long way for upcoming athletes in Nigeria, and it should be balanced (gender equality).

Furthermore, this initiative will attract sponsors and philanthropists to participate in the sporting system and engage in all ramifications to contribute their quota to developing sports in Nigeria.”