Jane Austen fans yet again clutched their pearls after Netflix released the trailer for their book-to-screen adaptation of Persuasion, the author's last novel published just six months before she passed away in 1817.

Directed by Carrie Cracknell, starring Dakota Johnson as Anne Elliot, the main character(whom a lot of fans had issues with the casting from the start, but I digress),  Cosmo Jarvis and Henry Golding.

Paste Magazine described it as "Jane Austen for people who didn't do the reading" and I agree.

"Now, having actually seen the full film, dear readers, it pains me to confirm for you that many of our initial concerns were not only valid—they probably did not go far enough," - Paste Magazine, July 2022.

Now, trailers could be deceiving because marketing purposes must prevail, but a major cringeworthy tweak to one of the most famous quotes from the novel set the entire fanbase ablaze.

Where Austen writes, in typical regency lingo, “There could have been no two hearts so open, no tastes so similar, no feelings so in unison, no countenances so beloved. Now they were as strangers: nay, worse than strangers, for they could never become acquainted. It was a perpetual estrangement” Carrie Cracknell’s Persuasion opted for “Now we’re strangers, worse than strangers, we're exes” 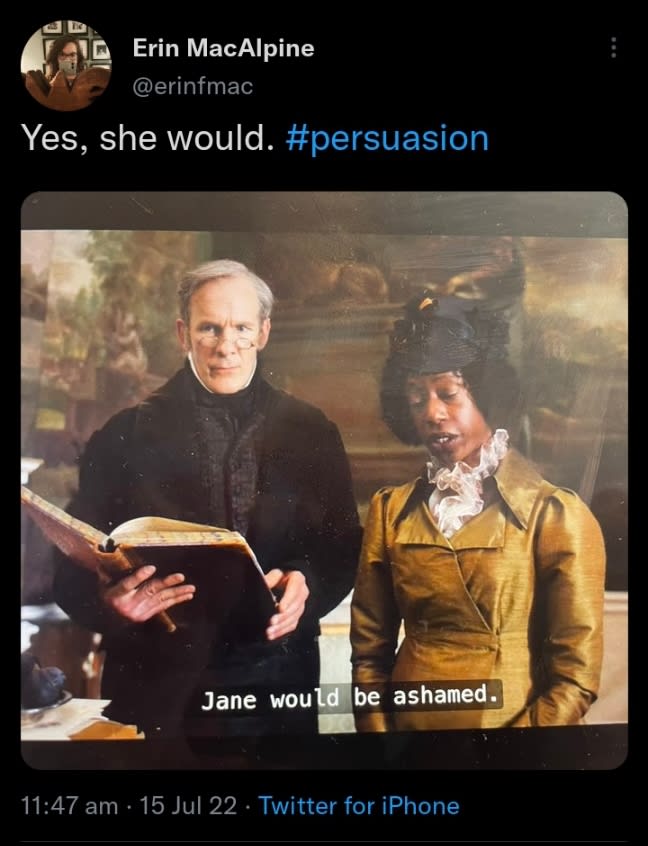 Book-to-screen adaptations are not expected to be exact but Netflix’s Persuasion does a lot more damage to what could have been an A1 victorian era film with the clout of the novel to push it. It is not that Netflix does not get the plot right but their seemingly modern approach to the acting and dialogue of the film takes away the authenticity of the century the film depicts and generally does not capture the essence or convey how it feels to read the book. But before we go into all the ways they butchered this adaptation, what was Jane Austen’s Persuasion really about?

The story centres on Anne Elliot, who was to be married once, at age 19 she falls in love and gets engaged to Fredrick Wentworth who at the time was a mere sailor and by the social standing way below her class, for this reason, Anne is persuaded by her family to break off the engagement, a decision that lives a void in her life for the next eight years until an unlikely circumstance makes their paths cross again.

Anne, now age 27 is still unwed and affected by her decision to end her relationship with Wentworth. When her family hits some financial crises due to her father’s lavish spending, they are forced to leave their estate: Kellynch Hall and move to a cheaper home in a city called Bath, in the meantime, they decide to lease out their home to an admiral and his wife who happens to be Wentworth’s sister. Wentworth who is now a wealthy and respected officer of the Navy visits his sister in Kellynch Hall. Anne at the time doesn’t move with her family to their new home just yet but visits her younger sister who is now married to Anne’s former suitor.

As their paths cross, creating a catalyst to a series of puzzling events that make up the rest of the story, Anne is made to confront her unended feelings and the consequences of her action with every encounter until the two eventually confess their mutual feelings for one another, renew their engagement and settle into a new life together. 9

So why could Netflix not simply deliver the story for what it is?

Netflix’s Persuasion had Dakota Johnson’s Anne looking into the camera, Fleabag style, explaining cues and interactions, verbally expressing her feelings and displeasures. WHY? Maybe Cracknell and her team thought this would do good in evoking the emotions Austen wrote about that admittedly would be hard to portray on screen, but their resolution came off as a clumsy attempt to hop on the anachronic mannerism trend that gives Bridgeton its flare and gave us a rather watered down version of Austen’s work, riddled with weak humour, shallow emotions and an unflattering romance as opposed to the devastating, melancholic and highly romantic premise the book is set in.

We also get scenes where Dakota Johnson’s Anne is nursing her emotions with a bottle of red wine, crying into a pillow, crying in a bathtub and drunk screaming Wentworth's name from a window across the building, like some ’90s romcom, wrong era!

There is also zero chemistry between Netflix's Anne and Wentworth, the intimacy was simply unflattering, one could hardly tell that the two were once (and are still as a matter of fact) in love with each other.

All we needed was an onscreen representation of Austen's Anne longing for a lost love and eventually the romance of second chance love, all we got was a silly protagonist smirking into the camera, spoon-feeding us the plot. BOO! TOMATOES!

One might be able to breeze through the acting, unlikely but not impossible but the dialogue will have you in tears, how a 2022 Twitter catchphrase snuck its way into a 19th-century movie adaptation, I do not know but I'll let the memes talk. 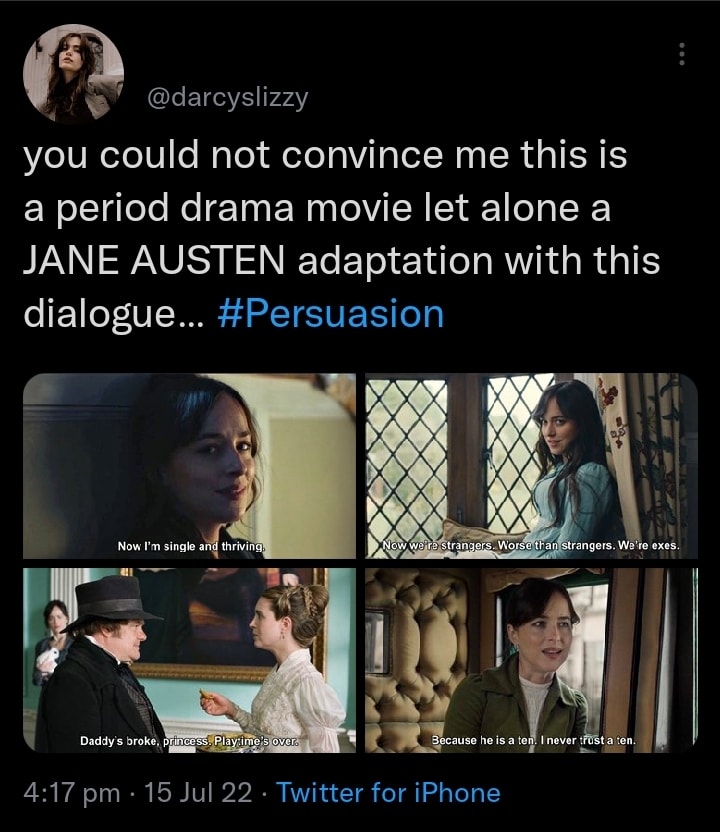 On her latest Air pod pro max too 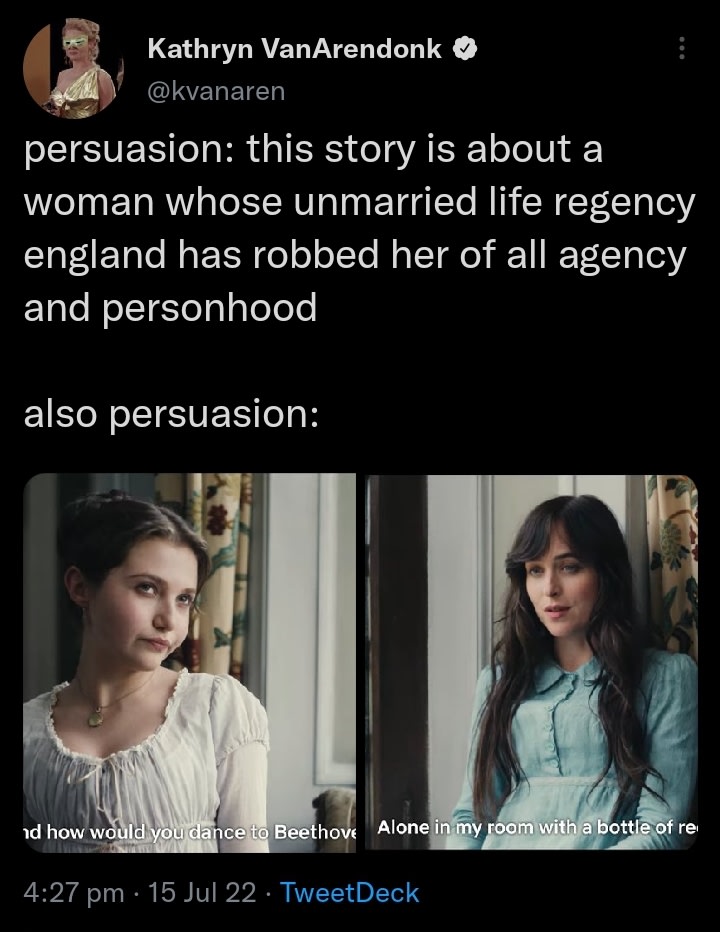 In a bid to be relatable, what could have been a great period piece turned out to be...this. (gestures vaguely at screen).

I feel that if Cracknell and her team wanted a modern spin so badly, they could have perhaps given us an actual modern spin in the way Austen's Emma was spun into Clueless but alas.