No "Soft Life" under the Patriarchy

The term “Soft life” simply means comfort and ease, a life of enjoyment with minimal or no stress. A soft life is an aspirational thing, and thanks to social media, the aesthetic is coveted by many. Though the trend started as black women prioritising their peace and happiness and actively centring themselves in their lives; it started devolving into messaging that preaches reliance on men and shedding feminist values as the route to achieving an enjoyable, ‘soft’ life.

It's 2022, why would you want to hand over that much control to a man?

“We lowkey got scammed.”

In this TikTok captioned “1950s woman meets the future”, a white woman complains about the effects of feminism on modern-day living as a woman. She laments the absence of butlers and maids and the need to work and complains about birth control and abortions.

The unfortunate truth is that 1950s housewives did not have it easy. Although women were part of and contributors to the war economy, it was not the norm to employ women outside of a state of emergency.   Post World War II, women were expected to be doting housewives, content with service in the home, enjoying the perks of the post-war economic boom in suburbia.

Yet, living in a patriarchal society, lacking autonomy and agency, stressed and anxious, many of these women turned to barbiturates, drank and consumed opioids. 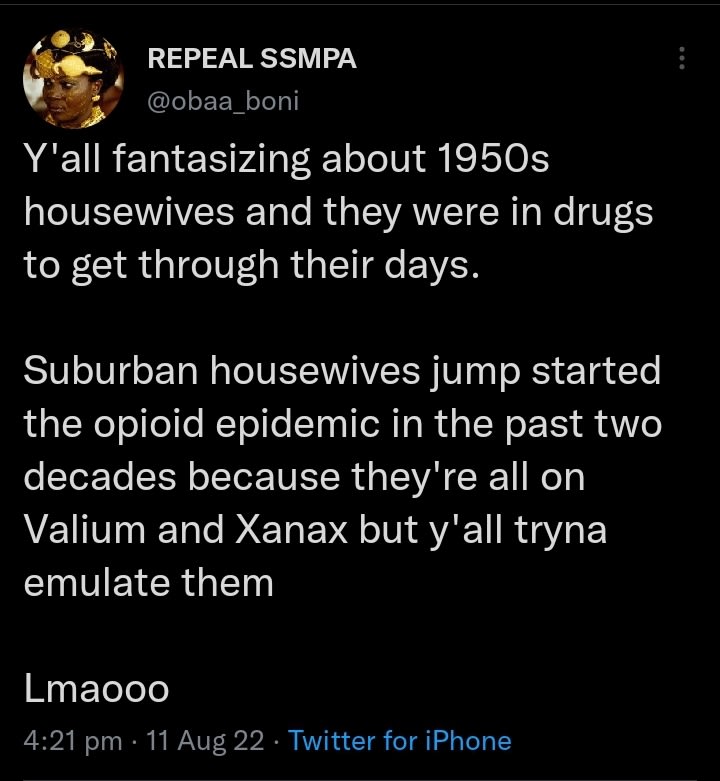 The mid-20th century saw a dramatic increase in drug use for treating perceived anxiety in women. Often referred to tongue-in-cheek as “Mother’s Little Helper,” medications like Prozac, Librium, Valium, and Miltown, a prescription tranquiliser that promised to make all their problems go away, were easily accessible and marketed to housewives especially.

The tranquiliser, Miltown, an anxiety-relieving drug known for its marked effect, was made commercially available in 1954 and was one of the most popular prescribed medications. By 1956, “doctors had written 36 million prescriptions for it. At the height of its popularity, one out of every three prescriptions called for this drug.”

The drug was marketed to housewives for anxiety, insomnia and emotional upsets. It was also advertised to pregnant women as being able to make pregnancy a more pleasant process even though the drug causes an increased risk of congenital disabilities and passes through breast milk, and can affect the nursing baby.

Meprobamate, known primarily by the brand name Miltown, had been tried by nearly 1 in 20 Americans by 1956, after only a single year on the market.

Miltown was the first drug in a class that physicians started calling “minor tranquilisers” in the mid-1950s, and doctors used the pill to ease a host of ailments in men, women, and even children—including headaches, rashes, tension, insomnia, childhood bed-wetting, high blood pressure, juvenile delinquency, and epilepsy.

The women in those times used drugs as a coping mechanism to deal with the harsh reality of a life of little choice. These women stayed at home and cooked and cleaned because that was the position assigned to them in society, not because they thought it was a life of ease and enjoyment.

Recently, we have seen a rise in regressive thinking and anti-feminist narrative, positing women’s experiences in the past as better than women’s experiences today on a systematic level. The woman in the video dreams of a time when women didn’t have to work, a time that never truly existed because black women have always worked, against their will or otherwise.

White women can be seen championing the cause, wistfully dreaming of the days when they worked exclusively in the home, aided by (black) servants or mind-numbing drugs. They believe it was an easier time and that work in the house then was a breeze compared to braving the workforce and managing a home on the side. Sadly, it wasn’t easy for women then, and it isn’t easy on women now, but at least today, we have rights that the 1950s women would have dreamed of, thanks to feminist movements.

The Tiktok is a beacon of white privilege and ignorance of the fact that these problems— being overworked without adequate compensation, useless, unhelpful husbands, insufficient time for maternity leaves, and so on are attributable to patriarchy and capitalism.

Feminism has helped women take several steps forward. Now we can buy/rent property in our name, get loans, financial autonomy is attainable, and bodily autonomy is a thing (and it wasn’t always, barely is even today). In addition, women have rights as separate entities from their husbands and access to education and career opportunities outside domestic work. Thanks to the work of the women who came before us, there is more to life as a woman than subjugation and servitude.

This movement of women advocating for financial reliance on a man while overseeing domestic work as favourable ignores the history that motivated women of the past to fight against it. Relying on the benevolence of a man for sustenance is risky as women had no claim to the wealth and property they helped accumulate, often finding themselves subject to the whims of their abusive husbands or cut off altogether at his death.

Ultimately, there is no “soft life” under patriarchy, and it is privilege and/or ignorance that causes certain women to advocate for regression in this day and age. Ask the older women in your life how they feel about depending solely on a man for sustenance; it should be an eye-opening conversation.