The Facts are The Facts; Abuse Is Not Subjective

Have you ever felt like sneezing and it just doesn't happen? Your nose itches, your face scrunches up, and your breath stops, ready for the sneeze to burst, but it just…doesn’t. It’s uncomfortable and elusive and leaves you feeling bereft somehow.

I'd like to imagine that this is how emotional abuse feels, at the very least. Unlike most forms of abuse; psychological, physical, and even financial, emotional abuse is a little harder to pin down. This doesn’t mean it doesn’t exist or it is not a form of abuse. It is, in fact, one of the most insidious forms of abuse because it is overt and leaves no physical evidence as physical abuse does. It also allows for other forms of abuse, like physical and financial.

In early September, we published an article on emotional abuse and how to spot the signs. The crux of our article followed multiple observations of a relationship in Nigeria's currently airing reality TV show; Big Brother Naija. That article opened us up to harassment online and insults.

However, of all the responses we received, this tweet struck out the most: 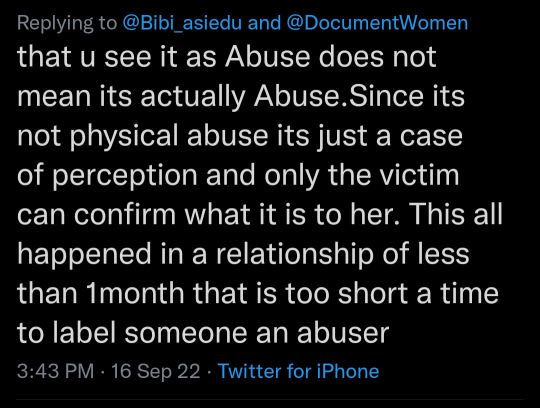 If we were talking about anything else, perhaps I might have agreed. We all have differing opinions and tastes.

There are so many subjective things, like our perception of music and art; like how good a song is or how tasty a plate of jollof rice can be.  Subjectiveness relies on personality, background, personal taste and bias. Objectiveness, on the other hand, is based on cold, hard facts backed by miles of data and years of study.

There are also many things that are objective; the truth is the truth, no matter how you slice it. The sun rises in the morning; the beach is full of sand; the earth is spherical. Abuse is abuse. It is based on factual data and years of study.  It’s not based on personal opinion or preference; abuse is what it is: treating someone cruelly or violently.

On the one hand, I’m aware that many people find it hard to recognise or even acknowledge (emotional) abuse, mostly because there’s barely any education on the subject; but it exists and is dangerous because of the very real negative effects it has on the victims. Document Women  writes about the signs and effects here

On the other, I know there are people who won't even call abuse what it is. They skirt around the issue, using euphemisms like “problems”, “relationship issues”, or “ups and downs” to describe what is clearly abuse.

See, our society is so desensitised to abuse that only extreme forms of it gets any attention, if at all. Even when it does, aspersions are cast, blame is assigned to the survivor, instead of kindness, help and care. The molotov cocktail of patriarchy, religion and a general psyche that is used to oppression ensures that victims are dismissed, the abuse on them minimised.

This environment  gives free rein to abusers to get even more abusive and more importantly, fails the victims. Not calling out abuse, keeping quiet or skirting around it is detrimental to the victim. Not only are they not protected, but they also become susceptible to even more forms of abuse.

This is not sustainable. For anyone.

Victims of abuse don’t have to be dead before we acknowledge their pain. Abuse should be called out instantly and with no hesitation. We must protect and shield victims, while abusers should be held accountable and should face retribution.

Being abused is never the victim’s fault, nor should anyone feel shame about being abused. It’s important to be able to spot the signs and immediately set(physical and emotional) boundaries between yourself and the abuser. Getting help is also important; talking about it is the first step.

Like our CEO Kiki Mordi said, "The culture of abuse thrives on silence and we’re here to make the loudest noise."

Getting professional help can also be instrumental in countering the effects of abuse. Speak to a counsellor or therapist; people who are skilled at identifying and correcting erroneous beliefs about oneself.

Find a community of people who will support you; your friends and family are an immediate answer.

This is because abuse often starts with the abuser trying to isolate their victims so that they find it harder to break away. Counter this by building that community that will support and hold you up.

Here at Document Women, We will never stop talking about abuse and its insidious effects; we can only hope that more and more people will get adept at spotting the signs and rejecting it immediately. There’s also no perfect or imperfect victim; anyone can be abused. The important thing to remember is: to reject the shame of abuse; it is not yours to carry.

We understand that we're just one voice in the choir singing up against abuse. So, here's a little reading list we've compiled.