The Role of Muslim Women during Ramadan

This year, Document Women reflects on the role of Muslim women during Ramadan, their duties as well as their status within the ambit of religion and family. Ramadan is a period of religious fasting for Muslims. The month-long period is the ninth month of the Muslim calendar and the holy month of fasting. It begins and ends with the appearance of the crescent moon. However, Ramadan 2022 has been quite different from previous years. There has been a marked increase in violent attacks, and Palestine has been occupied since 2020. There has been continued violence in the Middle East, and in Nigeria, the attacks from bandits and terrorists took a new turn. The conversations on social media were different from previous years. At the beginning of the month, set aside for Muslims to perform one of the pillars of Islam, Fasting, bandits hijacked a train heading to Kaduna from Abuja. The bandit kidnapped passengers and killed and severely injured others. At about the same time, a tweet was made by a Twitter user named Kawthar. Kawthar, in her tweet, mentioned that she thought that a woman did not need to ask for permission from her husband before leaving the house. Hauwa Shafi'i, another Twitter user and writer, had described a Quranic recitation competition she usually has with her siblings every Ramadan. Almost every year, her brother always wins because she and her sister start preparing for Iftar from 3 pm to 7 pm. Iftar; the evening meal with which Muslims end their daily Ramadan, fast at sunset.

The Quran and Hadith spell out the rights of a husband and a wife in marriage. One of those rights for the husband is the right to restrict his wife's movement. The Quran also states that a woman must obey her husband, and when she does not, her husband can admonish her.

"Therefore the righteous, women are devoutly obedient and guard in (the husband's) absence what Allah would have them, guard. As to those women on whose part ye fear disloyalty and ill-conduct, admonish them (first), (Next), refuse to share their beds, (And last) beat them (lightly); but if they return to obedience, seek not against them Means (of annoyance): For Allah is Most High, great (above you all)."

From this verse, ill-conduct can mean disobedience. Kawthar mentioned that it was unnecessary to ask permission to leave the house, which sparked a reaction from many Northern Nigerian Muslims on the timeline. Kawthar received so many hurtful comments and remarks that she had to log out of her social media accounts. What was wrong with her tweet, though? From the hadith, a husband has the right to restrict his wife's movement, but it doesn't state anywhere categorically that a wife has to ask him for permission before she leaves the house. It would be inconvenient for the husband if he was asked every single time if his wife could leave the house, and some Muslim men on Twitter agreed with this if his wife told him about every school run, every trip to the market, every visit to friends he would probably scream at her at some point. The hadith also implores men to be kind and compassionate, and it would be pretty unkind to subject a grown woman to ask for permission every time she needs to leave the house. It doesn't seem like the Quran could be used to support or rationalise the points behind the harassment Kawthar received on Twitter. 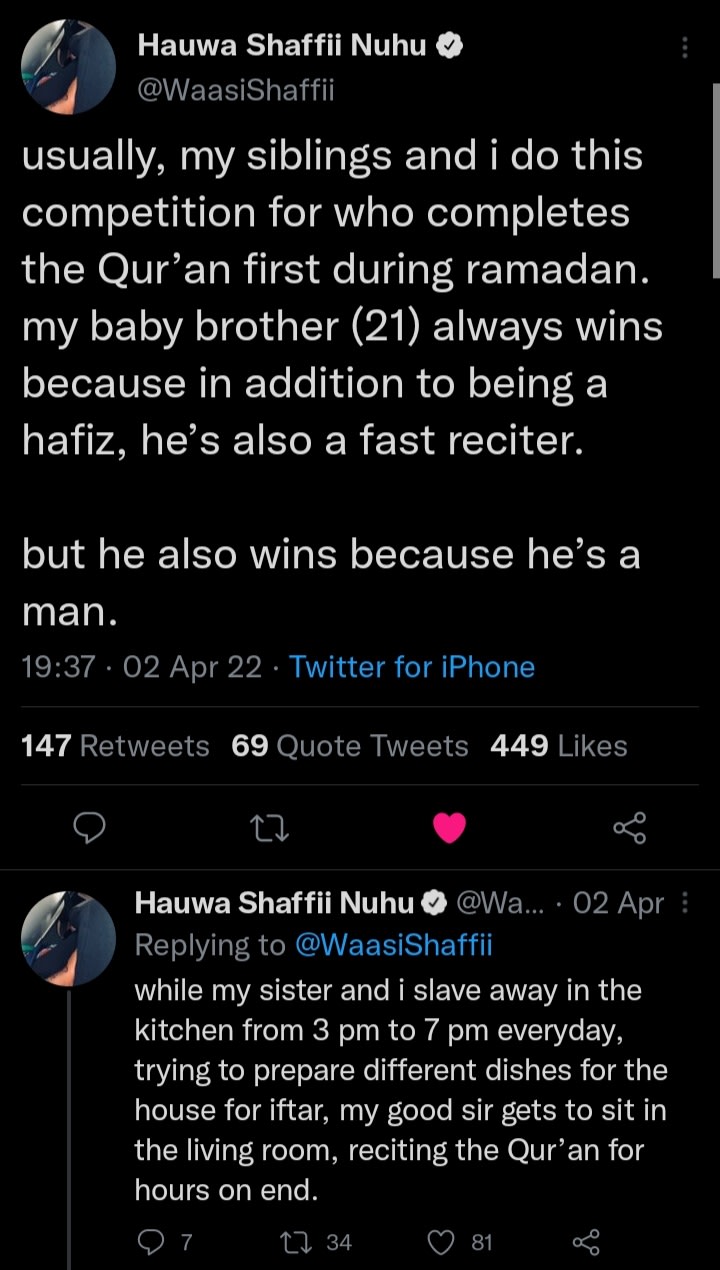 Every Ramadan, Muslim women have to prepare two slightly extravagant meals, Sahur and Iftar, every day for 30 days. They typically have a similar experience to what Hauwa tweeted and can easily relate to the tweet. They cannot perform acts of worship with the same efficiency as men. Hauwa's tweet was countered and disliked by a lot of Muslim men. Some of them said it was a problem with her own family, but we can say that it isn't true. Many Muslim women complain about spending all of Ramadan in the kitchen when they would rather spend it reading the Quran or doing something else. Some men said she shouldn't complain because one who cooks for a fasting person gets the same reward as the person who fasted. This take is often used to silence women when they speak out about spending time they could use to perform acts of worship to cook. Although the Quran instructs Muslims who are sick or breastfeeding and can't fast cook for people, they would receive the same reward. It also teaches men and women to carry out acts of worship in the month of Ramadan, so insisting that women should cook rather than perform acts of worship would be hindering Muslim women from completing one of the pillars of Islam effectively. It is also important to note that the Quran does not deem cooking for the household; as a woman's responsibility, and the Prophet Muhammad(PBUH) helped with cooking in his family. These incidents display problematic takes on Islamic teachings, often influenced by cultural norms. It also shows the ways Muslim men have used religion and instructions of the Quran out of context to restrict Muslim women. And even though they claim Muslim women have rights and hence don't need to defend them. They usually prevent Muslim women from enjoying the freedoms that exist. Muslims should not be restricted or distracted from worship in Ramadan because of cooking. It would be inaccurate and blasphemous to treat women as subordinates to men, especially in the name of Islam.